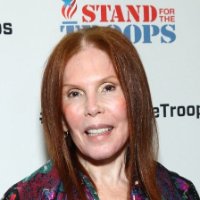 Until his death in 2005, Eilhys England Hackworth was wife, partner, co-author and muse to the late Colonel David H. Hackworth — our country’s most valor-decorated soldier since the Civil War. Ms. England Hackworth maintains her deathbed promise to chair Stand For The Troops (SFTT), the 501(c)(3) educational foundation the couple founded and dedicated to safeguarding the physical, mental and emotional well-being of America’s frontline serving and returning troops, by overseeing SFTT’s activities and keeping a current focus.

So committed was England Hackworth to her late husband and his vision, she walked away from a high profile career as a Mad woman on Madison Avenue to more fully support Hackworth on the issues of accountability and reform in the United States military, working with him for almost 20 years to ensure that America’s warriors always receive the right stuff.

Recently, with one in five injured Soldiers and Marines returning from Iraq and Afghanistan affected by combat-related Traumatic Brain Injury (TBI) and Post Traumatic Stress Disorder (PTSD) and a shocking 66 Vets attempting suicide daily – with at least 22 succeeding – England Hackworth and SFTT president Maj. Gen. John Batiste have established a Rescue Coalition to raise awareness of and destigmatize PTSD and identify, develop and support smarter more effective treatments for both PTSD and TBI. The goal: to help our most at-risk Vets get the timely treatment they need to survive and transition back to our American way of life they put their own lives on hold to protect.

Because of SFTT’s projected budget increases, England Hackworth has also stepped away from two of her greatest loves, screenplay writing and movie-making. She and Keith Buckler founded DragonDeeds LLC and have joined with other like minded entrepreneurs to both trade commodities and develop and facilitate funding for transformational technologies – a primary object being to tithe generously to SFTT.