Inspired by Vets in Her Life, Greenwich Woman Crusades to Help Soldiers Who Suffer From ‘Silent Trauma’

Published in the Greenwich Times For Memorial Day 2022 in Honor of All who Served and Sacrificed. 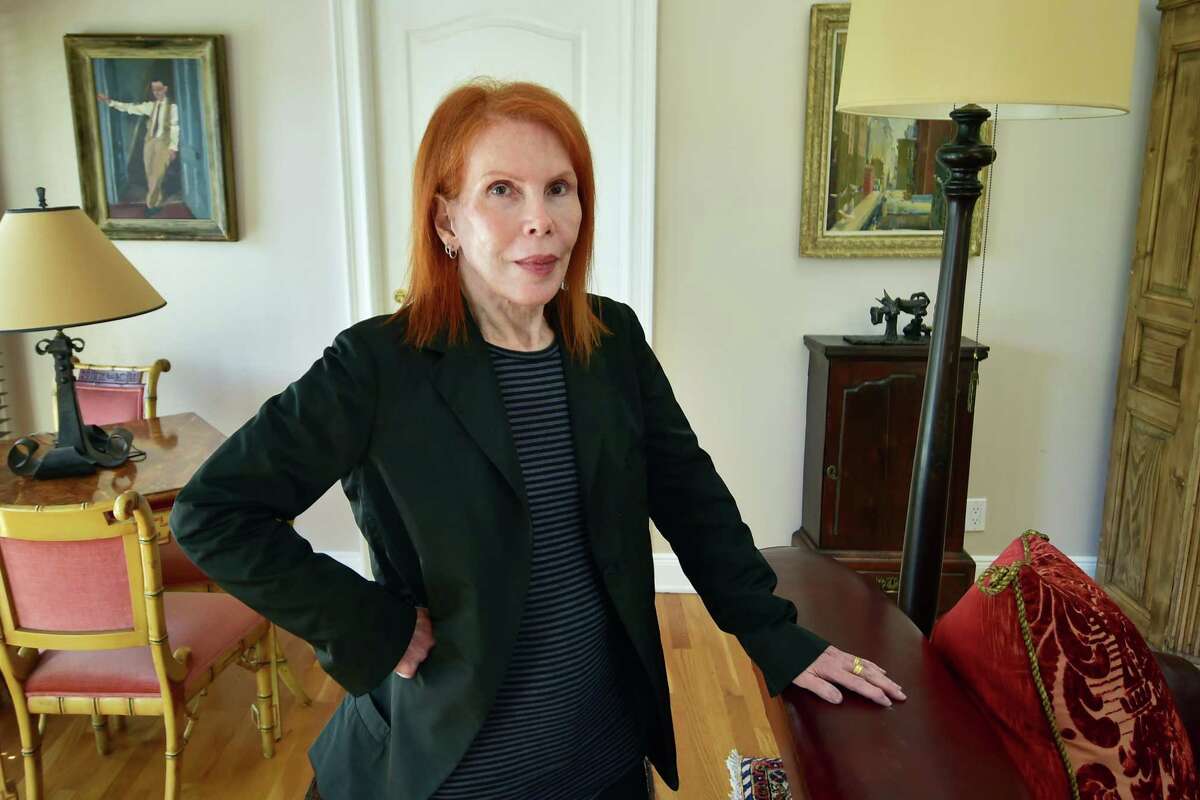 Eilhys England Hackworth, who started a nonprofit to help veterans cope with traumatic brain injuries and PTSD, poses at her home in Greenwich, Conn., on Thursday May 26, 2022. She was married to Col. David H. Hackworth, a highly decorated US Army officer, until his death in 2005. Christian Abraham Hearst Connecticut Media

GREENWICH — This Memorial Day, Eilhys England Hackworth will be thinking about the veterans in her life — her father, an Army surgeon who landed at Normandy in World War II, and her late husband, one of the most decorated Army officers in U.S. military history.
Her father, Dr. Gerald Haidak, rarely spoke of his time in the war, but she remembers clearly one time he talked about his experience coming ashore in northern France in June of 1944.

“He said the water was red with blood — ‘I never saw anything like it,’ ” recalled England Hackworth, a longtime Greenwich resident who co-founded a nonprofit organization with her husband to help veterans. Her father also took part in the Italian campaign in World War II and saw extensive combat there. 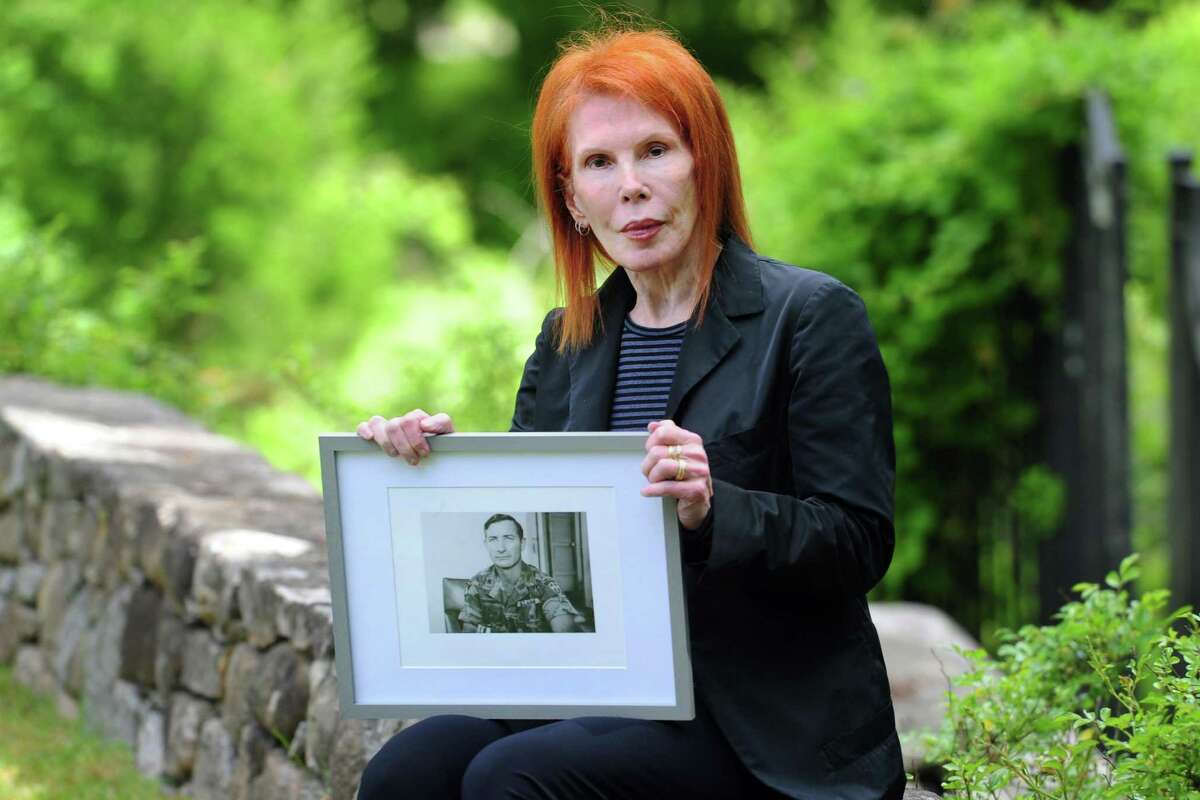 Eilhys England Hackworth, who started a nonprofit to help veterans cope with traumatic brain injuries and PTSD, poses with a photo of her late husband, Col. David H. Hackworth, at her home in Greenwich, Conn., on Thursday May 26, 2022 ~ Christian Abraham / Hearst Connecticut Media

Her late husband, Col. David Hackworth, is often described as the most valor-decorated soldier since the Civil War. He was awarded nine Silver Stars, four Legions of Merit, eight Bronze Stars, eight Purple Hearts and four Army Commendation Medals, among numerous others. Hackworth, who died of cancer in 2005 at the age of 74 with his wife at his bedside, also suffered from PTSD.

England Hackworth recalled a time the two were hiking in a national park in the western United States, when her husband went into a trance-like state, a flashback to his time in Vietnam. Hackworth appeared to be thinking he was walking through a minefield, or a Vietcong ambush was lying in wait around the next ridge, she recalled.

“It was like Vietnam to him,” and she had to shake him to bring him back to reality and the national park where they were hiking together.

“He was my great love, and I remember how much I miss him,” said England Hackworth, who collaborated with Hackworth on a regular syndicated column and other writing projects, working from their home in Greenwich.

“I felt such sorrow for him, and men had to go through this, to walk through the valley of death, and to have those symptoms.” England Hackworth, who was married to the former Army colonel for eight years before his death, moved to Greenwich with her husband for a quieter lifestyle.

Hackworth was also a notable presence in Greenwich. A memorial tribute in the Cole Auditorium of the Greenwich Library attracted 200 people, and a Greenwich proclamation declared June 10, 2006, as “Col. David Hackworth Day.”

England Hackworth ran a marketing and public-relations firm in New York City, and she is also a prolific writer and filmmaker.

As a tribute to her late husband, she said, and to fulfill a promise she made to him in his final days, England Hackworth co-founded Stand for the Troops, “to “carry on the crusade to help the soldiers who suffer most from silent trauma.”

The nonprofit organization has been working to fund research projects on traumatic brain injuries and to pay for treatment for veterans at a number of medical facilities around the country. 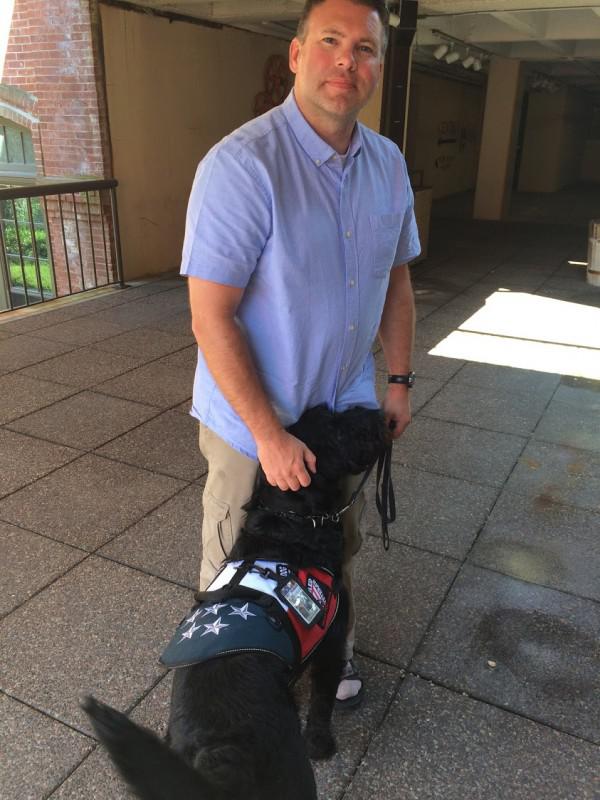 Ben Richards, a former Army major wounded in Iraq, received hyperbaric oxygen therapy that improved his condition, and he credits a Greenwich nonprofit for helping. His service dog, Bronco, appears at his side. Contributed photo / Ben Richards

Ben Richards, a former U.S. Army major who was hit with a suicide-car attack and a roadside bomb in two separate incidents in Iraq, said he struggled to read after he was discharged. Richards, a West Point graduate, credits the Greenwich nonprofit for helping him.

He suffered a traumatic brain injury and went through the standard protocols for treating it. But like other veterans coping with serious neurological issues, Richards found the traditional treatment measures lacking.

But he received hyperbaric oxygen therapy, calling it a major step forward. Richards says brain scans showed dramatic improvements in his neurological functions following a new round of treatments. Hyperbaric oxygen therapy uses a high-pressure chamber and pure oxygen to flood a patient’s body with oxygen. Research is still ongoing for the treatment, and there is some skepticism in the medical community,

But Richards says he has seen a big improvement since he was sponsored by the nonprofit to receive hyperbaric treatment at a medical facility associated with Louisiana State University.

“We had really good brain imagining, and we saw a 20 percent increase in brain function through that therapy,” said Richards, who was profiled on “60 Minutes.” His other mental-health metrics were significantly improved, he said, and his experience has been replicated in clinical trials with combat veterans. Richards is now completing a doctorate in history at Kansas State University.

“It was such an improvement to our family and our marriage,” said Richards, who lives in Washington state. “Ten years ago, when I was injured, I couldn’t read a book. I couldn’t remember what I read. Now I’m working on a doctoral dissertation.”

The Stand for the Troops organization is funding research at Columbia University and sponsors veterans to undertake the hyperbaric treatment, which Richards said was also helpful for treating PTSD.

“There’s a lot to be hopeful about,” she said, and she said she knows her husband would approve.