I had a delightful lunch yesterday with Maj. Ben Richards and Bronco, his service dog.  Also joining us for lunch were Eilhys England, Chairperson of Stand for the Troops (“SFTT”) and Dr. Yuval Neria, Director of the PTSD Research Program at Columbia Presbyterian. 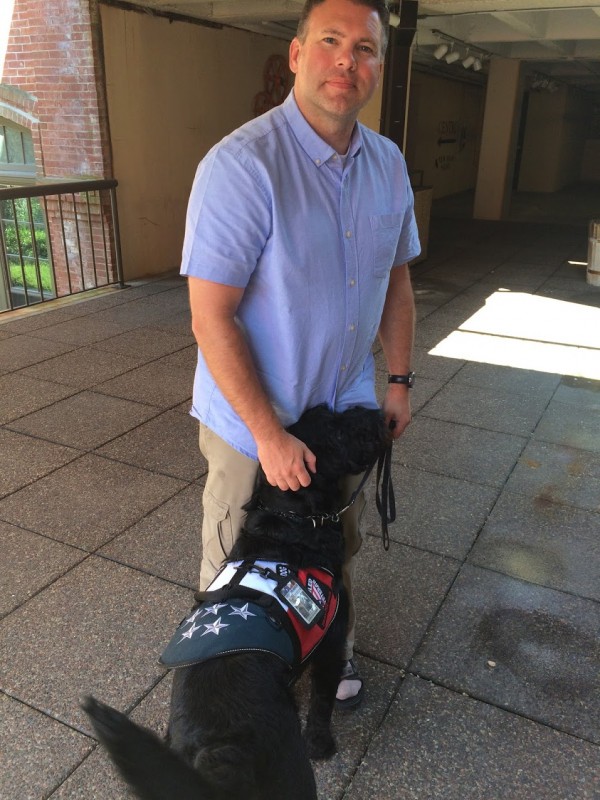 I hadn’t seen Bronco (a labradoodle) before and was interested in learning how service dogs are trained.

After the dogs reach maturity – normally 6 months – they begin an intensive 5 month training program designed to familiarize the service dog with elements of supporting a human being. For instance, the dog has to learn to navigate elevators and escalators and to respond to potential danger signals which could cause panic in the dog’s human companion.

A well-trained service dog is not distracted by peripheral events like the presence of other dogs or animals and will avoid eating food that has been dropped on the floor.

After the service dog has successfully completed his training, the certified service dog is then introduced to his/her human companion.  Ben spent seven weeks in intensive training with Bronco.  According to Ben, it was about 4 hours of training a day (generally in the morning) and a few weekend sessions.

Ben and Bronco have been constant companions for almost a year.  Ben mentioned that it is the first time in 9 years he has been able to sleep without facing the door of his bedroom.  Bronco will also wake him up if he has nightmares or if thunder is approaching which might threaten sleep and trigger an anxiety attack.

Bronco has allowed Ben to feel comfortable enough to attend movies and, in fact, he went to a museum in D.C. by himself for the first time in several years.   The museum visit brought a small to Ben’s face as he recalled that it was the first time he didn’t feel like he had to process potential threats without the attendant anxiety of not being able to do so fast enough.

Ben looked great and it was wonderful to re-establish personal contact with him again.  Ben is a brave warrior who has suffered his own particular demons and is intent on helping others recover their lives from the silent wounds of wars.

Ben’s service dog has brought much needed comfort, safety and stability to his life.

Sadly, the VA is “studying” the efficacy of service dogs in helping other Veterans with PTSD.  This study will not be available until 2019.

What the VA should actually be studying are its own failed programs of Prolonged Exposure (PE), and Cognitive Processing Therapy (CPT) which the VA continues to tout as being so successful in helping Veterans with PTSD.

While VA administrators and consultants like Dr. David Cifu can continue to hoodwink Congressional committees with their disingenuous sales pitch, most Veterans have given up on the VA with their substandard and largely ineffectual services.

Many Veterans like Ben are gradually taking matters into their own hands despite threats by the VA to withdraw benefits.  Fortunately, many States, private hospitals and charitable institutions are rushing in to fill the void left by the VA.

Is it too much to expect that the VA step up to the plate and truly support Veterans rather than hand grants to people and institutions who are prepared to parrot a pollyanna party-line based on half-truths and downright lies?

Our brave men and women in uniform deserve better.