The post that follows comes from my dear friend Brian Delate who I first met in 1996. We were at a party at my daughter’s house, as Brian’s late wife Karen and my daughter were in graduate school together. I was immediately taken with both Brian and Karen, it was hard not to be. They were attractive and warm, funny and smart and they both loved movies, a passion we shared. Brian and I soon realized that we shared another passion, a commitment to helping veterans heal from the invisible wounds of war. As a Vietnam veteran, Brian knew, respected and came to love my late husband Hack and he always told me that if SFTT ever needed support, he would help us — and the veterans we strive to heal — in any way he could. In honor of Treatment of Ten, I asked Brian to write a piece for us. And he did. Beautifully and poetically. Thank you, Brian.  ~ Eilhys England Hackworth.

It is January 2013 and I am back in Vietnam as both an American Combat Veteran and a writer/performer of MEMORIAL DAY (when remembering makes you want to forget… and being forgotten makes you want to die…), a one-man show I enact.  In each performance, I must step into the limits of human experience, which for me is my time spent as a warrior in a specific war during a specific year: 1969-70.

I had visited Vietnam the year before.  In 2012, I stood on the hallowed ground, where death once danced wildly with (my) life, realizing that my invisible wounds of PTSD needed deeper exploration. I broke away from the group I was traveling with in Hanoi to spend 24 hours in Chu Lai – my area of operation where thousands of my fellow American soldiers were also stationed.  To “go back” was a challenge because as we all know Life Goes On. Or tries to. Once in Chu Lai, I saw some old hangars that are dormant, but now resemble something out of H.G. Wells’ Time Machine. The runways that were vibrantly active in 1969 are now barely discernible. In another few years they won’t be visible at all.

Now, in 2013, I am back in and around Chu Lai, with a driver, a translator and a cameraman. We drive around kind of hit-and-miss on different roads to see what I could remember. I forgot how very beautiful the beaches are. And for whatever reason, they are completely empty of people and development.  This absence intrigued me; what was I expecting? Wanting? Looking for, exactly? Life going on, perhaps?

We are on a mission of sorts. I had brought with me a snapshot of myself standing on a particular beach in a very striking cove-like area where I and another soldier saved a drunken infantry guy from drowning. In so doing, we all almost drowned. Very scary. I never imagined one of my near-death experiences during the Vietnam War would involve drinking and the ocean. 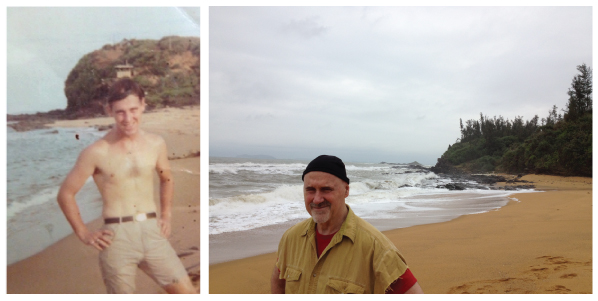 Having found the cove, my companions give me some time near to reflect and pray for all those who did not survive — and now, to my own surprise, I include the former enemy, the Vietnamese, their families, and their communities.

Believe me when I say how totally unthinkable this sentiment was at one time; I am surprised at my own compassion and ability to forgive.

At the end of this particular day in 2013, I stayed at a beautiful old Inn near Chu Lai for the night where I met an older, very fragile and very friendly Vietnamese man, who was one of the few Vietnamese I have met who admitted to fighting the communists. He expressed in very broken English the horrible aftermath for him and his family.  We connected emotionally, and at one point, he held my hand firmly, wept a little and thanked me for visiting. He then sent “good wishes” to the Americans.  This was just one “memorial moment” I experienced on my MEMORIAL DAY trip.

Days later, I complete two performances of my show with a singular astonishing result.  Once was at the University of Hanoi — college kids are college kids — meaning that they really do not care about the war. As they say repeatedly, “We’re tired of hearing about that war.”

In the other instance, we visited the Veterans Association of Vietnam (VAV) which is a high-level government agency with a new leader who can veto my performance in a second. In short, the stakes were high for me to knock their socks off.  The head of this agency was a Lt General (one of their war heroes) and he had three other senior officials with him along with our central government ‘minders’ and a couple of important representatives from the USA/Vietnam Society.

I got to do about 12 minutes of MEMORIAL DAY and it landed pretty powerfully on these men and women — they really got it. When I first met the General, we shook hands politely and we nodded. After I finished the piece, he immediately stood up, came over to me and, with great vigor, shook my hand hard. He then looked me in the eye and kept touching first his heart and then my heart with his fist, saying, through the translators, ‘We identify with the humanity.’

This surprised everybody. The other officials followed suit and the formalities disappeared and a load of personal sincerity and even some humor dropped into the room. My new friend on this trip, Pete, a former infantry captain, gave me a single line review — ‘You’ve got balls, man.’

A day or two later, we are at the Institute for Humanities and Social Sciences, where we would interact with a combination of their psychologists, veterans and students. Initially, there was the time-consuming formality of introductions and translations back and forth. Then Dr. Edward Tick (our leader and author of War and the Soul) gave a smart and informed speech, addressing what is known and has been gathered from both sides, with regard to the aftermath of the Vietnam War that took place here so long ago.

I sat next to one of their psychologists, also a Combat Veteran from circa 1970. He made very clear that everybody in his world (family, friends, immediate community, et al.) was involved with the fight against America. What really got my attention was how they dealt with returning soldiers. The family and the community shared the burden even more than the government.

There was an instance during the talk where one of the students questioned Dr. Tick’s assertion of the value of bringing American Veterans back to Vietnam — returning them to the scene of their trauma.

Dr. Tick has had tremendous success with helping hundreds of Veterans trust the healing benefits of one’s community and spirituality along with these kinds of “going back” visits.

I spoke up at this point because I was here last year in 2012, and at that time, instead of feeling some immediate kind of transformation, relief or release, I fell back into re-living many of the fears I had had during the war. I ended up re-experiencing some of the trauma versus working through it or purging it.

While I was in the city of Hoi An in 2012, I was sitting in a very beautiful dining room at a very elegant hotel with my wife Karen.  We were having breakfast and a young waiter walked by.  He and I made eye contact. Immediately, an emotional tumor (as I have come to call them) erupted and I couldn’t stop it wailing. I had to get outside of the hotel in order to regroup.

Quick back story: As a young sergeant in 1969, after coming off of a rough night with my squad and not having slept for some time, I got into it with a young Vietnamese man.  We called them Cowboys. They were really just thugs — he spit in my direction and I went into a berserk rage and proceeded to beat him, almost to death. At one point, I left my body and felt like I was watching somebody else commit this violence. Finally, I could not pick up my arms to punch anymore, but this Cowboy kept trying to spit in my direction, even with one eye unattached and literally coming out of his head. After my maniacal behavior, I experienced another layer of deep self-loathing.

Anyway, back to 2012 and the hotel in Hoi An: After I was able to regroup, I went back into the dining room, sat back down with Karen and spoke about what had happened. As we continued to sit there, the same young waiter came by, smiled and asked me if I wanted more tea. This time nothing happened — we made eye contact once again, but in this instance a guilt-ridden memory was rapidly evaporating. It was like that scene in the film The Mission, where the DeNiro character endlessly drags his armor around as a form of punishment or penance, for having killed his brother. A native cuts the rope connecting him to the armor and he is free.

In that moment, after being triggered, re-living my trauma and then returning to breakfast, I experienced a significant purging that, in my opinion, would not or could not have taken place had I not been actively seeking more Meaning and Truth or Seeking what was Missing. I was replacing an old memory with a new memory, an important component to Healing.

In one of my last days in Vietnam 2013, I get to present a sample of my play at a Writer’s Conference with over a hundred Vietnamese writers and veterans in attendance. Some of what I present in the play does not need translation — it is a combination of specific movement with music that shapes a narrative of what it is like to prepare for combat, engage in that combat situation and then recover from combat. I use the overture from Tannhauser by Wagner, the music representing the sacred and the profane aspects of what Combat Warriors endure.

I want to mention that PTSD is a collective wound and a soldier/Veteran cannot carry that wound alone. If they try to, they will either collapse or the damage to the individual will never be healed and the casualties and hurt will continue to accumulate, affecting their family, friends, colleagues and community.

And lastly, the Greeks had this interesting insight on the — ‘Definition of Happiness – which is making full use of your powers along the lines of excellence.’ That does not mean living in any kind of perfection, but it is about living and living fully. That is what I am doing now and I am here to help my fellow Combat Veterans do the same thing.

Eilhys England Hackworth, widow of the late Colonel David H. Hackworth (our country’s most valor-decorated soldier since the Civil War) and co-founder & chair Stand For The Troops (SFTT), the 501(c)(3) foundation dedicated to safeguarding the physical, mental and emotional well-being of America’s military personnel.