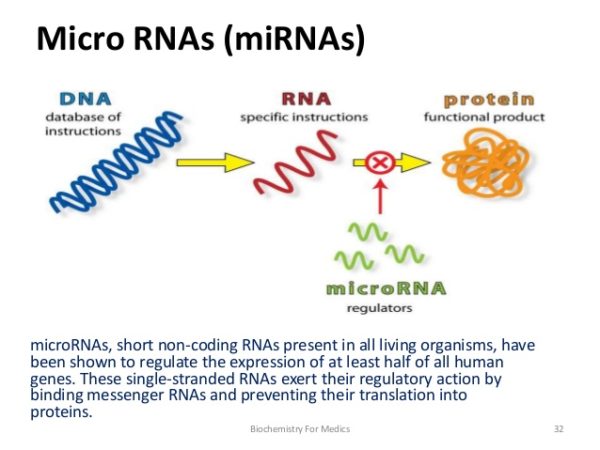 Image from Biochemistry for Medics

“We discovered that these small molecules, called miRNAs, are present in different amount in the blood of persons suffering from PTSD compared to trauma-exposed and control subjects without PTSD.

“We identified over 900 different types of these small molecules. 40 of them were regulated differently in people who developed PTSD, whereas there were differences in 27 of the miRNAs in trauma-exposed individuals who did not develop PTSD.

“Interestingly, previous studies have found circulating miRNA levels to be not only correlated with different types of cancer, but also with certain psychiatric disorders including major depressive disorders. These preliminary results of our pilot study suggest that miRNAs might indeed be candidates as predictive blood markers (biomarker) to distinguish between persons at high and low risk of developing PTSD. However, several steps need to be performed before such results can really have an impact on the larger field and in clinical practice. In addition to working towards biomarkers, the results may also provide novel information about the biological mechanisms underlying the development of PTSD”.

While more studies are required to confirm the results of this study, it does suggest that blood-testing could help identify risk factors for susceptibility to PTSD for troops scheduled for deployment.

It is difficult to generalize from such a limited test sample but clearly, evidence based markers seem to be a far better way to test the incidence of PTSD and brain trauma than the simplistic PTSD screening questionnaires currently employed by the Department of Veterans Affairs (“the VA”).

There continues to be much promising research into preventing and curing PTSD and TBI, but sadly the VA continues to insist on failed therapy programs while sponsoring research studies than focus on helping Veterans cope with the symptoms of brain trauma rather that provide meaningful solutions.  The cannabis and ecstasy studies suggest that the VA feels far more comfortable dispensing prescription drugs rather than provide Veterans with a meaningful path to full recovery.

While thousands of Veterans continue to suffer from combat-related brain trauma, the VA has done precious little to help these Veterans and their families cope with this debilitating problem.  While the VA insists that they are doing everything possible to help Veterans with PTSD and TBI, the story of Eric Bivins and countless other brave warriors paints a far different picture of what Veterans can really expect at the VA.