Secretary of Defense Weighs In on War with North Korea
U.S. Defense Secretary Jim Mattis said on Friday that any military solution to the North Korea crisis would be “tragic on an unbelievable scale” and Washington was working internationally to find a diplomatic solution. North Korea has defied all calls to rein in its nuclear and missile programs, even from China, its lone major ally, calling them legitimate self-defense.  Read more . . . 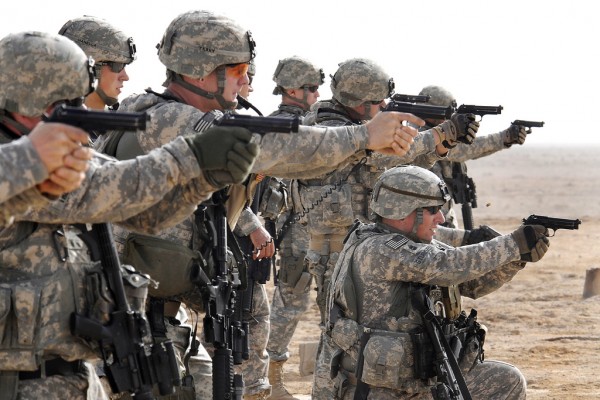 Could the US Military Purchase Handguns Online?
The Defense Department may start doing a whole lot more online shopping in 2018, if Republican Rep. Mac Thornberry has his way. The Texas chairman of the Armed Services Committee unveiled new legislation Thursday that aims to cut costly bureaucratic red tape at the Pentagon by allowing the military to buy everything from pens to treadmills from business-to-business sites such as Staples and Amazon. That would free the federal government’s biggest bureaucracy from using its current “expensive” and “onerous” contracting and scheduling process to buy its commercial goods, according to Thornberry.  Read more . . .

Large Number of Troops Separated for Misconduct had PTSD
Nearly two-thirds of the 91,764 U.S. troops who were separated from the military for misconduct in a recent four-year period had been diagnosed with post-traumatic stress, a traumatic brain injury or another condition that can lead to misconduct, according to a report released Tuesday, raising questions about the Pentagon’s treatment of combat veterans. The Government Accountability Office found that the Defense Department needs to take action to make sure that commanders appropriately consider medical conditions when weighing what to do with service members facing misconduct allegations. Some 57,141 troops were separated from the service despite a potentially relevant diagnosis between 2011 and 2015, and 13,283 of them received other-than-honorable discharges that could prevent them from receiving care from the Department of Veterans Affairs, the report said.  Read more . . .

Improper Payments at VA Continue to Grow
The Department of Veterans Affairs cost taxpayers $5.5 billion dollars in improper payments last year, according to a new report by the Veterans Affairs Office of Inspector General published Monday. An improper payment is any payment that “should not have been made or that was made in an incorrect amount under statutory, contractual, administrative, or other legally applicable requirements,” according to the report. The findings, published on May 15, reported an increase in improper payments from $5 billion in 2015 to $5.5 billion in 2016. It also found that two VA programs failed to keep their rate of mistaken payments below 10%, and six of its programs failed to meet reduction targets set last year.  Read more . . .