2019 BATTLE OF BROOKLYN RUCK MARCH Freedom Isn’t Free – And Boy, Do I have The Blisters To Prove It

If there’s one thing I can’t stand more than sending very young True Believers like me off to fight an unwinnable war with one arm tied behinds our backs, it’s walking.

Why? Because ever since I moved almost 30 years ago uptown to Harlem (where my WWII vet Irish-born father was a fireman for more than 35 years) from Hell’s Kitchen, where I was born almost 68 years ago, I’ve bicycled, uptown and down, well over 70,000 miles. That is, Dear Reader, more than twice the circumference of planet Earth.

As a result of joining the ‘two-wheel cult’ – and also giving away my beloved motorcycles (see S. McQueen in “THE GREAT ESCAPE”) – I liken walking to suddenly stepping into a movie running in super slow motion, and about as boring and as time-consuming as watching paint dry.

So, what did I do on August 25th? Why, I took a walk.  A very long walk —  17.76 miles, to be exact – to commemorate ‘The Battle of Brooklyn,’ what historians all agree to be the seminal – and savage – commencement of The Revolutionary War. I also agreed to blog about it despite never having ever been on the Internet. A last minute ‘DH’ of sorts and solicited by Stand for the Troops (SFTT), chiefly Eilhys England who with her husband David “Hack” Hackworth founded the seminal support group for returnees with TBI/PTSD from SE Asia and every battle since. Hack, whose military career and very open disgust for the ‘quagmire’ that became The War In Vietnam, not only ended that career, but was then used by the makers of “APOCALYPSE NOW” as the ‘back story’ for none other than Col. Walter Kurtz. 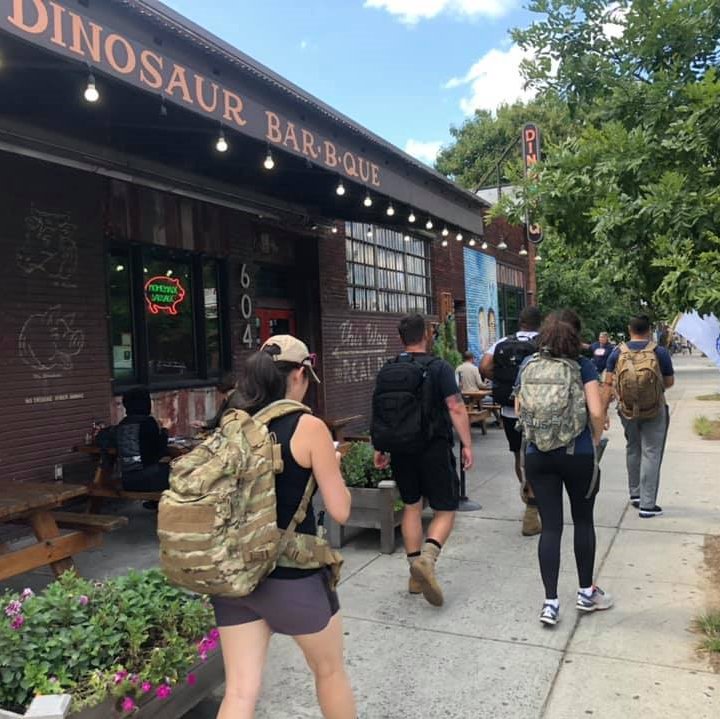 So, walk, I did. Organized by an amazing bunch, NYC VETERANS ALLIANCE, I showed up just after dawn, with my 2-wheel, in Bay Ridge, Brooklyn, at John Paul Jones Park, in the shadow of The Verrazzano Narrows Bridge – which my uncle of the same name and one of the very few survivors of the sinking of the USS Indianapolis, helped build, as a wire lather, along with The World Trade Towers. I was then summarily stripped of said bicycle by Kristen Rouse, our march’s no-nonsense D.I., even after whining to her over coffee (deliciously brewed by other vets from the BLACK 6 PROJECT) about a bum knee from a pretty recent biking accident.

After locking my steel cabaijo to a street sign, off I went, trailing after Team Three, one of four teams totaling up to a bit more than 40 actual foot soldiers. And, here I must correct myself. We didn’t walk. We marched. Up and down mountains. Through graveyards and ghettos and gentrifying ‘Hoods now long since having lost most of the blood-drenched, body-strewn stench and pallor and palpable horrors of this country’s existential breach birth, its colonial crucifixion in the ruthless meat hooks of its imperial ‘mother,’ England and its miraculous re-birth as ‘The Land of the Free and the Home of The Brave.’

Narrated as we went with incredibly graphic depth and detail by our team leaders, Neath Williams and Kate Gustafson who brought the seminal, spellbinding first skirmishes of The Revolutionary War to light in ways I’d never imagined.  Except, of course, when depicted by other combat vets (see Wilfred Owen, Ernest Hemingway and Philip Caputo).

We learned about farm boys and girls – along with both slaves and Native Americans, too – armed with single-shot muskets, axes, and pitch-forks, and loosely organized militias coming from as far away as Maryland, Massachusetts, France, and Prussia, up against a British Naval Armada so huge that when its 800 armored warships appeared over the horizon, someone described it ‘as if the entire continent of Europe had sailed across the Atlantic’ and, on orders from King George III, given what that mad regal believed was the simple task of putting down that nascent rebellion “at whatever the cost in blood and treasure.”

The fighting actually began on the 25th of August, 1776, the very day, 243 years later, that we revisited those now silent, solemn theatres.

From the high hills of Greenwood, The Flatlands and Gowanus – which was then a mosquito-infested swamp rivaling in scope and size Mississippi’s Delta and swallowing up bayonets and rebel bodies and Red Coats and royals alike into its swampy bosom wholesale – and on to Red Hook and Brooklyn Heights, I both marched and appreciated the real cost of the ‘war for independence’ which was brought to life, for me, like nothing else before it.

What shocked me – and directly spoke to my own war experience as a surgical medic flying wounded bush grunts out on retrofitted C-130s at the very end of The Vietnam War, was both the body count – tens if not hundreds of thousands of dead and wounded, most of their names and sacred stories lost to history – and the actual time it took to actually run the Red Coats out, eight long years.

This, but especially the POWs – thousands of them who, after being captured, were put in chains inside the holds of prison ships moored in what is now The Brooklyn Navy Yard and held there for the duration of the war.

Now, that, as someone who lived in Belfast during the height of what became known as The Troubles (1979-84), and who was personally swept up into The Irish Freedom Struggle, as we called it, during The Hunger Strikes, when 10 members of The Provisional Irish Republican Army starved themselves to death rather than wear English prison uniforms, is the British Empire I’m most familiar with, and its evil twin totalitarianism that keep freedom quite expensive, but nevertheless worth fighting for.

It kept me walking nearly a marathon this past summer Sunday, blisters or no blisters.