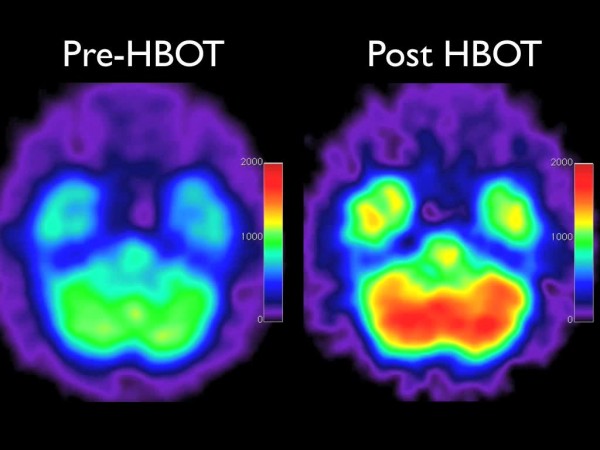 In this report (a lengthy extract is printed below), Dr. Harch argues persuasively over the many benefits of using HBOT in treating brain injury:

Not surprisingly, Dr. David Cifu, Senior TBI Specialist in the Department of Veterans Affairs’ Veterans Health Administration, gave the standard stock answer from the spin doctors at the VA that:

There is no reason to believe that an intervention like HBOT that purports to decrease inflammation would have any meaningful effect on the persistence of symptoms after concussion. Three well-controlled, independent studies (funded by the Department of Defense and published in a range of peer reviewed journals) involving more than 200 active duty servicemen subjects have demonstrated no durable or clinically meaningful effects of HBOT on the persistent (>3 months) symptoms of individuals who have sustained one or more concussions. Despite these scientifically rigorous studies, the clinicians and lobbyists who make their livings using HBOT for a wide range of neurologic disorders (without scientific support) have continued to advocate the use of HBOT for concussion.

The charge is inconsistent with nearly three decades of basic science and clinical research and more consistent with the conflict of interest of VA researchers.  A final point: in no publication has the claim regarding effectiveness of HBOT in mTBI PPCS been predicated on an exclusive or even dominant anti-inflammatory effect of HBOT. Rather, the argument is based on the known micro-wounding of brain white matter in mTBI, and the known gene-modulatory, trophic wound-healing effects of HBOT in chronic wounding.  The preponderance of literature in HBOT-treated chronic wound conditions, is contrary to Dr. Cifu’s statement of HBOT as a “useless technology.”

As a layman, Dr. Harch’s detailed rebuttal (see FULL RESPONSE HERE) completely destroys Dr. Cifu’s “non-responsive” comment to the scientific points raised in Dr. Harch’s report.  In my view, it goes beyond the traditional “professional respect” shown by peers:  Dr. Harch was pissed off and, in my opinion, had every right to be.

Not surprisingly, Dr. Cifu has not responded to the irrefutable arguments presented by Dr. Harch.

The discussion of HBOT is not a subject of mild academic interest.  Specifically,  Veterans are being deprived of hyperbaric oxygen therapy because Dr. David Cifu and his cronies at the VA are misrepresenting the overwhelming evidence that suggests that HBOT restores brain function.

It is difficult to forecast how this academic drama will play out.  Nevertheless, I suspect that David Ciful will eventually be viewed by Veterans as performing a similar role within the VA as Alvin Young, aka “Dr. Orange.”

I hope and pray this is not the case.  On behalf of tens of thousands of Veterans who are denied HBOT treatment for PTSD and TBI by the clumsy and sloppy claims of Dr. Cifu and others within the VA, please “do the right thing” and lend your support to HBOT as a recommended VA therapy for treating brain injury.