Of all the current “alternative” therapies reviewed by Stand For The Troops (“SFTT”), hyperbaric oxygen therapy or HBOT is clearly supported by evidence-based clinical trials and an abundance of evidence (both scientific and anecdotal) that it help reverse brain trauma.

What is Hyperbaric Oxygen Therapy (“HBOT”)?
Hyperbaric oxygen therapy (HBOT) is a medical treatment which enhances the body’s natural healing process by inhalation of 100% oxygen in a total body chamber, where atmospheric pressure is increased and controlled.  According to Harch Hyperbarics,  “oxygen is transported throughout the body only by red blood cells.

With HBOT, oxygen is dissolved into all of the body’s fluids, the plasma, the central nervous system fluids, the lymph, and the bone and can be carried to areas where circulation is diminished or blocked. The increased oxygen greatly enhances the ability of white blood cells to kill bacteria, reduces swelling and allows new blood vessels to grow more rapidly into the affected areas. It is a simple, non-invasive and painless treatment.”

How Does HBOT Work? 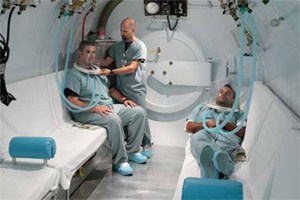 Depending on the type of medical institution you to do and the reason for treatment, you will receive HBOT in one of two settings:

What is the VA’s Position on HBOT
Based on their own trials, the DoD and the VA insist that there is insufficient evidence to support the use of HBOT in treating Veterans with PTSD.  Nevertheless, the VA is currently conducting new HBOT trials at VA facilities in Oklahoma and California.

How Much Does HBOT Cost?

A one-hour “dive” in an HBOT chamber can cost anywhere between $200 and $1,800.  While prices tend to be lower at independent clinics, HBOT facilities tied to hospitals can charge more because HBOT treatment may be covered by medical insurance.  In the case of PTSD and TBI, an initial series of 40 dives is recommended to occur over a two-month period.

SFTT is convinced that there is overwhelming scientific evidence to support the use of supervised HBOT to help Veterans with PTSD and TBI.  SFTT has written extensively on this issue over the last several years.  Please find below suggested posts:

VA Reluctantly Agrees to Provide HBOT for Veterans with PTSD

HBOT:  A PTSD Therapy for Veterans that Works

What Does the VA Have Against HBOT?

IDF and VA Part Ways on Use of HBOT

Veterans with PTSD:  The VA or the Highway

Meet Dr. David Cifu: The VA Gatekeeper for Veterans with PTSD and TBI

Anecdotal Evidence in Support of HBOT

There is an overwhelming number of “stories” detailing the benefits of HBOT.  Found below are just a few that were posted on the SFTT website.

While no one will claim that HBOT or any therapy will work 100% of the time, the application of hyperbaric oxygen in a controlled and carefully monitored environment has produced significant improvements in patient outcomes.    More importantly, HBOT is a non-invasive procedure without the often unpredictable effects of addictive prescription drugs.