Many years ago (perhaps 10), the US Army started began installing sensors in helmets to track the impact of IED events on brain trauma among combat troops. 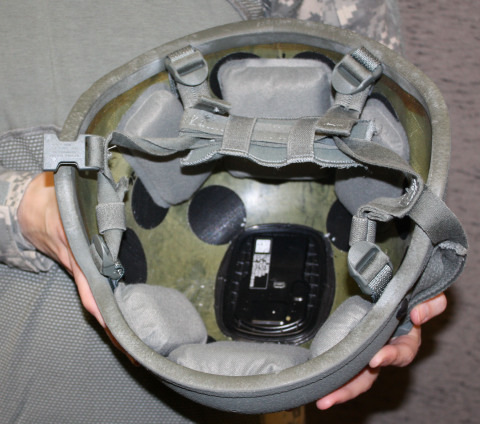 SFTT reported in 2010 that BAE Systems unveiled its latest concussion sensor for soldier helmets, named Headborne Energy Analysis and Diagnostic System (“HEADS”).  Apparently, BAE and the military have been tracking military “concussive” events for some time since the press release refers to an earlier version already installed in military helmets.

“The HEADS smart sensor is also designed to provide medical professionals with important data that may help determine the severity of a possible traumatic brain injury (“TBI”). The second generation HEADS sensor reportedly provides medical teams with a valuable diagnostic tool that utilizes radio frequency technology.   Spokesperson Colman claims that “With our new ‘smarter’ sensor, if a soldier is exposed to a blast, possibly sustaining a concussion, not only will the HEADS visual LED display be triggered at the time of the event, but once the soldier enters a specified area, such as forward operating base or dining facility, a series of strategically placed antennae will scan all available HEADS units and send data to a computer, identifying any soldiers who may have sustained a blast-related brain injury.”

Two years later, SFTT followed up with another post asking the next logical question:  “Military Helmet Sensor Data: What does it show?”

Today, some five years later, SFTT is asking the same question:  Where is the data and what does it tell us about concussive events suffered by men and women on the battlefield?

“As recent history shows, the US Army and DOD are unwilling to share relevant data with the public that might suggest that the equipment provided to our brave warriors is deficient.   In fact, Roger Charles, the Editor of SFTT, was obliged to file a request under the Freedom of Information Act (“FOIA”) to obtain forensic records of troops killed with upper torso wounds to evaluate the effectiveness of military-issue body armor.   A  federal judge in Washington, D.C. recently ordered the Army’s medical examiner to release information about the effectiveness of body armor used by U.S. soldiers in Iraq and Afghanistan or to justify the decision to withhold it.  For Roger Charles and those in SFTT who have followed this issue for several years, it is unlikely that the US Army will open their kimono and confirm what most already know:  the body armor issued to our troops was not properly tested and is most likely flawed.”

In the absence of compelling evidence to the contrary, one can only conclude that the military has discovered serious structural flaws in the designs of the “standard-issue” combat helmet, but doesn’t want to alarm combat troops (or their families).  Presumably, the “mad scientists” at the Soldier’s System Center at Ft. Belvoir are fast at work trying to build a safer helmet, but one must question how this invaluable data is being shared with those who study brain injuries.

It is alarming to think that even the secretive and misleading NFL leadership has been far more forthcoming about brain injuries than our military leadership.   It is both sad and frustrating that the DoD and VA have not been more proactive in sharing this information with scientists and the medical community so that we can take responsible action to help brave young men and women protect themselves from harm and assist those with brain trauma recover their lives.

Frankly, hiding under traditional military fallback position of “we don’t want the enemy to know the vulnerabilities of our equipment” rings a bit hollow when 22 Veterans are committing suicide each day.