DIA Report Suggests that Russian Military Has Modernized
The Pentagon’s Defense Intelligence Agency has released a new assessment of Russian military power—reviving a Cold War-era practice. The agency concludes that the modern Russian military builds upon its Soviet heritage but has modernized its capabilities and doctrine for the present day. “The Russian military has built on the military doctrine, structure, and capabilities of the former Soviet Union, and although still dependent on many of the older Soviet platforms, the Russians have modernized their military strategy, doctrine, and tactics to include use of asymmetric weapons like cyber and indirect action such as was observed in Ukraine,” the DIA report states.  Read more . . . 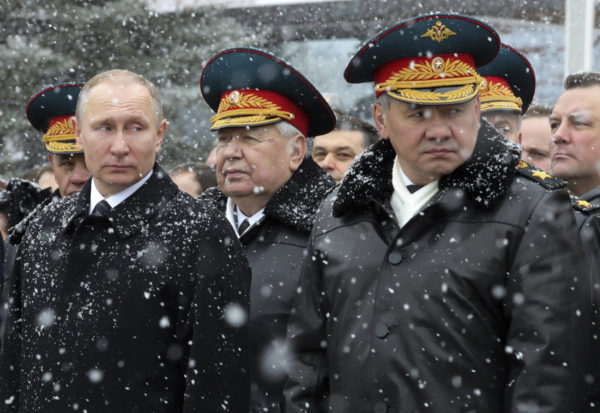 North Korean Ground Forces are Formidable
As Washington ratchets up the pressure on North Korea—or potentially launches a preemptive strike—the Kim regime in Pyongyang has options to strike back hard at the United States and South Korea using purely conventional means.  While analysts often focus on the so-called Democratic People’s Republic of Korea’s arsenal of ballistic missiles, the real threat emanating from the North comes in the form of heavy artillery and special operations forces, which could wreak havoc on the South. In the event of a war on the Korean Peninsula, Pyongyang’s ground forces are the greatest threat to the Republic of Korea (ROK) and the U.S. forces stationed there—short of nuclear weapons.  Read more . . .

Sweeping Changes in Tricare for 2018
A series of sweeping Tricare changes could have a big impact on some of the military health care system’s users — including an extra three months of deductible-free coverage.  Read more . . .

Continued Canine “Research” Encouraged by the VA Leadership
At the Department of Veterans Affairs, part of our mission is to push the envelope constantly in search of medical advancements that will help improve the lives of disabled veterans.  But our ability to accomplish that part of our mission stands at risk as a result of legislation recently added to an unrelated spending bill passed by the House of Representatives that would eliminate a key component of VA’s research efforts: our canine research program. If this legislation passes the Senate, it would stop potential VA canine research-related medical advancements that offer seriously disabled veterans the hope of a better future.  Read more . . .

Equine Therapy to Treat PTSD
In 2008, Retired Army command sergeant major Sam Rhodes found that working with horses helped him cope with these feelings and gave him a new sense of inner peace and purpose ― and he wanted to share that with others affected by PTSD. He now runs a nonprofit called Warrior Outreach, which offers free programs that teach veterans and their loved ones the basics of horse riding and care. He operates out of his ranch in Fortson, Georgia, about 30 miles from Fort Benning Army Base.  Read more . . .

Harvard Study Suggest that Women with PTSD May Develop Lupus Later in Life
A Harvard study of more than 50,000 women over the course of 24 years found that the greater degree of trauma a woman had experienced, the more likely it was that she developed lupus later in life. There is a greater correlation between PTSD and lupus in women than any other risk factor, including smoking and obesity. About five million people worldwide suffer from lupus, a chronic, incurable autoimmune disease that causes kidney inflammation and can affect many organ systems.  Read more . . .