Rebuilding the VA One Bureaucrat at a Time

“There are no two words more harmful in the English language than ‘good job,'” according to J. K. Simmons in his riveting role as a jazz instructor in Whiplash. 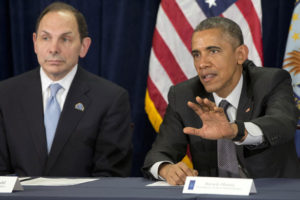 Frankly, Mr. President “chipping away” at the problems of the VA is simply no where near a “good job,” let alone “mission accomplished.”

Simplified Model to Fix the VA

While I have no intention of engaging in partisan “gotcha” games, some problems are simply too big to fix with a bureaucratic house-cleaning.  With 340,000 employees, the  VA seems managerially adrift and totally unresponsive to the needs of our brave Veterans.   Can it be “fixed” from within?  I doubt it.   Responsiveness to address the needs of our Veterans clearly seems to have taken backseat to a bureaucratic structure that is both self-serving and adrift from the needs of the constituents it is mandated to serve.

In these situations, it is generally best to segregate the organization into activities or functions that “work” from those that have manifest problems.  Sure, some Veteran support functions may not be “broken” and in those cases it might well to determine what resources are required to fix the problem – and, if adequate resources are allocated to borderline cases, will the desired outcome be acceptable.

These need not be a complicated exercise, but is certainly one which VA bureaucratic insiders will sabotage.  The following decision tree results:

Simply throwing more taxpayer money at an institution with a stunted bureaucratic hierarchy  makes absolutely no sense.   I can sense President Obama’s frustration, but sadly the chronic neglect of our brave Veterans requires more that “chipping away” political soundbites.

Lat summer with great fanfare, Congress passed emergency legislation designed to provide Veterans with emergency healthcare in the private sector if adequate service was not available from the VA.   In general, the “Choice Card” was provided to Veterans who were more than 40 miles from a VA facility, however, it now appears that the VA disqualified some 80% of those Veterans who applied for medical help from the private sector.

It is no wonder that the entrenched bureaucracy at the VA is fighting tooth-and-nail to avoid letting Veterans determine the care they wish to receive.   James Tuchschmidt of Concerned Veterans argues that:

“We are now entering a realm where we, quite frankly, are running a health plan, where the veteran, the patient, decides what happens to them, and where they go, and how they get care, and what care they get. And this is a huge cultural shake-up, quite frankly, for us as an organization.”

Will the VA allow this initiative to succeed?  I doubt it, unless both the President and Congress insist on VA leaders who are prepared to effect “real” change rather than administer the status quo which is largely broken and ineffective in dealing with the needs of our Veterans.

For those looking to find help near you, PLEASE CLICK ON THE FOLLOWING LINK to find Community Resource Centers near you.